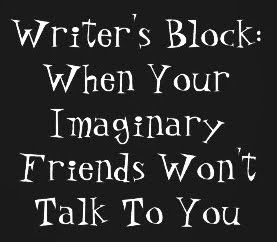 My writing group took an unplanned hiatus during the summer but got back together on Monday night. There was a lot of catching up to do. Before the night was over, my stomach hurt from laughing about moose hunting in Cape Breton, I learned some Disney vacation tips, and I got to physically hold our first published book. (Of course it’s not “our” book at all, I just want to bask in Meghan’s success for a little bit longer.)

The best part of the night, however, was when we actually talked about our writing.

As some of you know, I’ve been working on a book for a couple of years. Nothing deep or award-winning, it’s just (hopefully) an entertaining page turner. I have gone through some very productive spurts and the first half seemed to write itself but, now that I’m about two-thirds done, I’ve hit a very dry patch.

That doesn’t mean I haven’t been writing, I’ve finished a few shorter pieces of fiction and even some poetry, but I’ve been struggling to get back into the novel. Even though I’ve managed to write a few pages here and there, I’ve lost the spark.

On Monday I confessed my lack of productivity to the group and, instead of chastising me or even letting me off the hook, they asked, “Why?”

It ultimately comes down to my lack of direction in the story. I feel lost. I thought I had a clear vision of the plot, but as I wrote, my characters began to behave unexpectedly. This might sound a little nutty but it’s true. For example, a previously innocuous character, suddenly became a prime asshole and created an unforeseen twist.

I laid out my doubts, giving examples of where the plot had gone off the rails. My three friends gave encouragement, “That sounds good… That still kinda works… Ummm, I guess that could happen…” As the absurdity of what I was describing set in, and the mutual laughter reached a crescendo, the funniest, but wisest, words were spoken. This is my new mantra.

“Just keep writing, you can shave the crazy off later.”

Have you ever been given some sage advice?

11 responses to “My new mantra”