I’ve decided to go a bit retro on Fridays and show some old photos and share their story. Please let me know in the comments if you like the idea.

Inspired by this week’s series of faith articles on A Clown on Fire, I’ve decided to share images of my past faith. 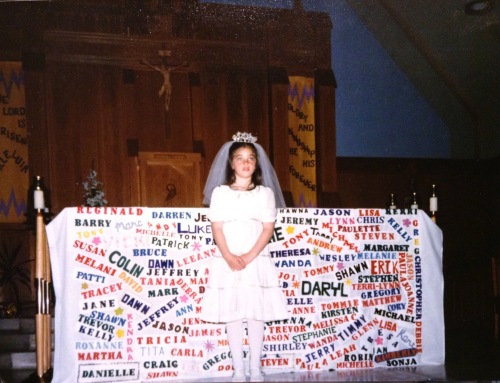 I say “past faith” not because I no longer have faith, but because my current beliefs are very different. As a young child I was in awe of the crucifix and mesmerized by the rituals of the Roman Catholic Church. I think that is apparent in this picture.

While many Christian churches use communion as a symbolic “meal” or as a representation of the Last Supper. The Catholic Church believes that Christ is truly present in the Eucharist (the wafer and wine). You are literally receiving the “body and blood of Christ”.

The white dress symbolizes purity and reminds you of your Baptism

My seriousness was  because I was worried I wasn’t “pure” enough. You see, I also have a clear memory of lying to the priest that morning in the confessional. I didn’t have any sins to tell so I had to make some up!

My favourite thing about these pictures is my veil, which was also worn two years earlier by my sister. When my mother got married she didn’t own her dress, but she bought herself this veil. My sister and I subsequently wore it at our own weddings.