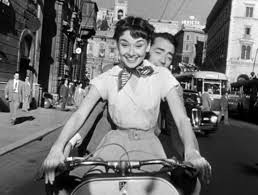 It’s been a while since we returned from Italy but I have yet to tell you about our last stop. As with Venice and Florence, this Rome experience was very different from my original trip in 2000. Thirteen years ago was very rushed and I was exhausted by the thought of all the things that needed to be seen. For this trip, we planned to spend the largest chunk of our time in Rome and we had only pre-booked a few excursions.

I won’t get into all of the details, because there are just too many details. Instead, I want to tell you about two specific tours that we did. They were fantastic!

We ate some incredible food earlier in the trip but nothing came close to what we discovered on the Eating Italy Food Tours. We were guided by Sarah, an American who has lived in Rome for ten years. She walked us through the Testaccio neighbourhood where the Romans go for gourmet foods. 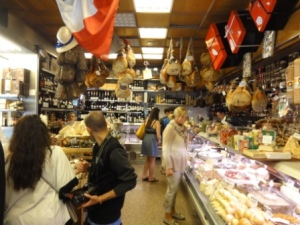 We learned how to spot fake gelato, we had bruschetta made from fresh bread and tomatoes in the market, and we fell in love with ten year-old balsamic vinegar. It was wonderful! 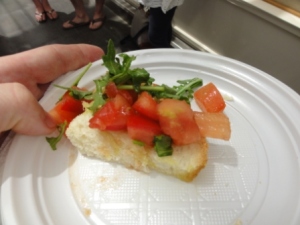 Did I mention the pistachio cannoli? Amazing! 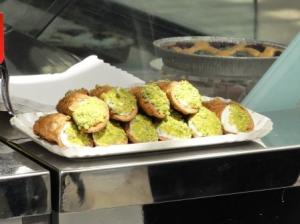 We would recommend this tour to everyone. Not only did we get to taste a lot of amazing food, we learned how to find it ourselves and how to make the most of dining in Italy.

A few more days into our stay, we had a tour for the Colosseum and Forum through Dark Rome. By this point in the trip we had a few of these under our belt and while they were always very informative, they were also long and tiring. We weren’t expecting anything different for this one. I was happy to do the tour with my husband but on my previous Ancient Rome tour, I was bored out of my skull.

As we waited for the various groups to be organized, I spotted one male guide mixed in with all the women. I quietly mentioned to my husband that I hoped he would be assigned to our group. All our tours were delivered using headsets and earphones and I was tired of having a sharp woman’s voice in my ear for hours. Plus, I thought a man might give a different perspective to the gory history of the Colosseum.

We got lucky and Simon was our guide. This tour was the complete opposite of the tour thirteen years ago. It was funny and riveting. Simon was an archeologist who did tours for extra money when he was home from a dig. As a student, he had worked excavating portions of the Forum. He showed us the “most important wall in Rome” which, of course, was the wall he had worked on for three months. His humour was dry and his knowledge was deep.

Simon walking through our shot!

Our tour included access to the replicated stage, the holding rooms under ground, and the top-tier, all of which were off-limits to the general tours. We had splurged for the “extras” and it was worth it. For four hours, Simon taught us history. We learned a lot, but more importantly, we were entertained.

He taught by telling stories and he made us the main characters. “You, you are a Senator, so you would come in this entrance.” “You are a slave, you have come to the market on your day off. This is what you would do…”

The hours flew by and we were sorry when it was over. Just like our vacation.

One response to “Roman Holiday”