Italy in a previous life

In May of 2000, I had finished some work in Paris and had a couple of weeks off before I was due in London for my next assignment. Looking for an easy way to fill the time, I booked a European bus tour that went through 8 countries in 12 days. It was a whirlwind meant to give you a “taste” of each city.

It was a Contiki tour for ages 18-35. This is a stock photo from their site…

At 27 years old, I was the eldest participant by 7 years.

My roommate for the entire tour was the only other female solo traveler who also happened to be the youngest on the trip, a newly turned 18. She was from a suburb of Manchester and had never before traveled further than London. The tour manager asked me to “keep an eye on her.” This was hard to do as I generally retired to our room to read after dinner while the rest continued on to party. The majority of the group was American and they were especially keen on the European drinking age limits.

One night in the wee hours, I was shaken from sleep by two of the American girls and I had to retrieve my young charge from a bar a few blocks from the hotel. She was rowdily under the influence and was refusing to leave with the rest of the group at closing time. When she saw me, however, she calmly took my hand and followed me out as I apologised to the establishment’s owner in broken German.

She was a sweet girl who, since leaving school, had been working in a shop saving money to pay for her Grand Tour, but we didn’t have much in common. My travel objective was to hit all of the museums that I never had time to visit due to work, while her main goal was to buy a beaded necklace at every stop. This would be a typical breakfast conversation at one of our big city stops:

She: What are you going to do today? Can I come along?

Me: Sure. I’m going to the museum/art gallery and then I’m going to see the church/square/fountain. If there’s time I might walk up the bell tower/city vista before dinner.

She: Oh… I see. You’re not going to do any shopping? I heard there are markets on the famous bridge and beside the famous monument. I’d really like to find a cute necklace as a souvenir.

Me: No, I’m not planning any shopping.

If you’ve read about my distaste for shopping here, you can imagine my horror of crowded tourist markets full of trinkets that are over priced and have no practical purpose.

So we didn’t see eye to eye on the must-sees of each city but, by the time we got back to London, she had accompanied me into a few galleries and I had bought a beaded necklace from a market in Florence.

The point of that whole story is just to tell you that I had traveled through Italy before. Thirteen years ago our first stop was Venice and I hated it. 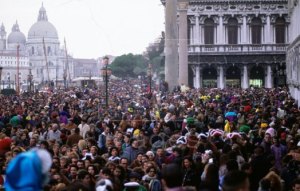 It was humid, the canals stunk and the place was unbearably crowded. The bus drove over in the morning and out that evening and I couldn’t be more relieved to be back over that bridge.

Venice was our first stop on this trip as well. I was excited because it was the start of a wonderful vacation with my husband. I vowed to put the memories of Venice2000 behind me. Frankly, I didn’t care where we were. Sure, St. Mark’s would be insane and the air would be fetid, but we would eat long leisurely meals that I hadn’t cooked.

Then something amazing happened… I fell in love with Venice.

I’ll tell you about it soon.

6 responses to “Italy in a previous life”