; My story isn’t over yet 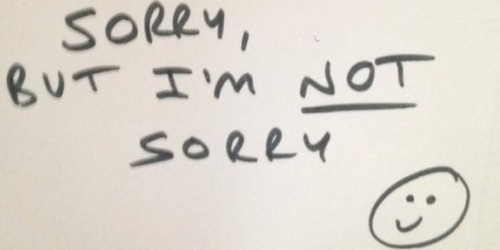 Wow! It’s been almost a full year since I’ve posted anything here. I know time flies, yada yada… but that’s still very hard to believe. However, even though this neglect embarrasses me deeply, I’m not going to apologize. Here’s why:

1. The Husband says I apologize too much (usually for things that have absolutely nothing to do with me) and I’m working hard to change this behaviour.

2. This blogging drought was caused by positive circumstances in my life, and that’s not something for which to apologize. C’mon… even I know that!

In the past, when there was a significantly long lag between my posts, it was usually because I was having a rough go of it with my mental health. Unfortunately, my instinctive reaction to a depressive period has always been to distance myself, to retreat as far as I can inside myself instead of reaching out to seek much needed help. There have been many times over the years when this has nearly been the death of me… and I’m not speaking metaphorically!

Fortunately, THIS long absence was simply due to a lack of free time.

About a year ago (and totally unintentionally) I began doing things outside of the usual work and familial duties that used to take all of my effort. It was a such a gradual thing that I really didn’t even notice.

I got back into painting and revisited some long-neglected fiction projects. I started socializing more and began playing tennis a few times a week. I even stepped up my volunteering and became the chair of a non-profit board.

So… I guess what I’m saying is, I haven’t posted this year because I’ve been too busy living! Yay, me!

Now, while my absence may have been unintended, my return is very deliberate. This week, when I realized how long it had been since I’d posted (and then had the epiphany as to why that was) I knew that today was the perfect day to dive back in…

World Suicide Prevention Day may not sound like a day to be celebrating, but it is to me!

Like many of you, I’ve lost friends to suicide, and today is a good day for me to remember that it wasn’t their fault… just like it wasn’t my fault those times that I came close to dying from suicide.

As much as I’ve missed this blog, it may take me a while to get back into the creative groove. I’ll try to brush off the rust as quickly as possible, but between now and October 10th, World Mental Health Day, I’ll also be recycling some of my previous posts on the topics of mental health and suicide prevention.

So, here’s the one that started it all… My fish are dead*

Yep, it’s good day to be back, and it’s a GREAT day to be alive!