The loves of their lives 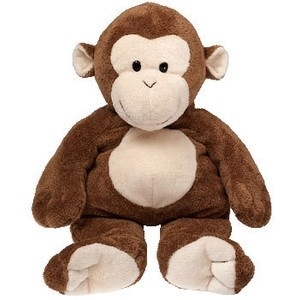 This is a Ty stuffed monkey named Dangles.

In our house, he is goes by the name of Bobo (named after the baby monkey from the book Hug.)

Bobo was a 1st birthday present for CJ (from an awesome friend) and has been his near-constant companion for the past seven years. I say “near” only because Bobo doesn’t attend school or play outside. He does go on every trip, including this week’s camping, and is a well known figure at church and around the neighbourhood.

Three years ago, when it was time to start school, CJ’s sole anxiety was about leaving Bobo. He decided to bring him the first day, but he would stay in his backpack. Knowing he was there was enough. After that day, Bobo joined us for the trip to school but would remain in the car, waiting to be reunited with CJ at the end of the day.

Now Bobo tends to be a stay-at-home monkey, but he is still quickly retrieved if we start a movie, or even just settle in to read a few chapters of Harry Potter. And, of course, he is firmly snuggled in CJ’s arms every night.

Oh… Bobo just told me he doesn’t like his posture in that last picture (he suffers from severe osteoporosis and scoliosis) so he’d like me to take a more flattering shot.

That’s a bit of a sexy pose, Bobo… cheeky monkey!

One evening, not too long ago, we had kissed the boys goodnight and left them to sleep. All was quiet in the house for a while, and then we heard sobbing. The Husband and I raced upstairs thinking all sorts of catastrophic thoughts.

Turns out, CJ was grieving about some imagined night in the future when we would no longer let him sleep with Bobo. We quickly reassured him that he could sleep with Bobo for the rest of his life if that’s what he wanted to do. (He figures he will, at least until he’s married.)

A couple of months ago, I received an e-mail from the daycare the boys both attended from ages 1 to 5. It was the director, letting me know that they had found Bobo and she would hold him in the office so I could come by and get him.

CJ has not been in daycare for 3 years!

This was some other child’s stuffed Ty monkey which the teachers had found and immediately assumed it was CJ’s. That just shows how much a part of CJ life Bobo has been.

Not to be outdone by his older brother, ET also has a little stuffed buddy. His Ty name is Pursely and this is what he looks like on the interwebs.

This is what he looks like on our bathroom counter.

His adoptive name is Kitty. (ET didn’t need no stinkin’ book to come up with an awesome name!)

Kitty isn’t as long in the tooth as dear old Bobo. He is only 5 years old. He has, however, lived a hard life. He spends a lot of time swinging around by his tail and jumping from the 2nd floor. He doesn’t always land on his feet.

Well, now that you have been introduced to these treasured members of our family (apparently I’m their Grandmother) I need to sneak into a couple of bedrooms and tuck them back under the arms from whence I stole them.

Are there any stuffed loved ones in your life?

17 responses to “The loves of their lives”