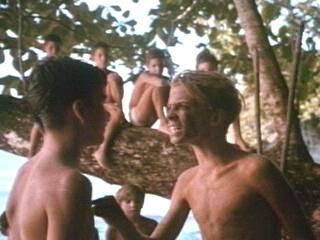 Lord of the Flies (1990); movie adaptation of William Golding’s novel

Generally, I believe kids need to be left alone to play, without interference from adults.

On our side of the block, we have a total of seven boys between the ages of 5-9. (Take a moment to contemplate what this means in terms of noise.) We, the involved parents, let the boys work through their issues and only step in when someone gets hurt, either physically or emotionally. Even then, if it is minor, they are usually able to sort things out on their own.

This isn’t because we’re lazy — although it is a royal pain to have to stop whatever you’re doing to be the referee — but by sorting out their own disputes and bruised feelings, they learn how to compromise and make amends.

A few days ago, a recent empty-nester across the street told The Husband how much she enjoys sitting on her porch watching our group of boys. She specifically commented on how well they arbitrate their play and how quick they are to ensure injured parties received remediation.

As my boys get older and more involved in team sports and group activities, these skills are becoming more and more important. From the sidelines, I’ve seen them join a team where they knew no one and quickly make a place for themselves. I’ve also seen them welcome a new kid into a team and help them find their bearings.

It might sound like I’m bragging, which is not my intention, so allow me to add some counter-balance; I’ve also seen my kids act like complete assholes.

I’ve seen them take a ball for their own use, ignorant that it was being used to occupy a toddler. I’ve seen them celebrate a goal too exuberantly and be the cause of hurt feelings. I’ve seen them almost knock people off their feet in their race to get somewhere.

These instances of poor behavior, however, are usually due to obliviousness and they are quick to see their fault when made aware. I’m pretty hard pressed to think of anything they’ve done that was intentionally mean or hurtful — even too each other.

So yeah, I’m a pretty hands-off parent during play time — as long as everyone is abiding by Stephanie’s Common Rules of Civilized Society.

So, to sum up, my motto is let the kids sort it out themselves… that is, unless I need to step in.

You see, I also believe there are cases, when there has been a serious infraction of the above rules, that adult intervention is mandated. In case you haven’t figured out where I’m going with this, I’ll just state it plainly;

I’m one of those moms.

As an adult, I think it is my duty to keep an eye on kids and correct bad behavior, even if they are not mine.

If I see a child doing something that might be dangerous, or exhibiting seriously bad behavior, and I don’t see a guardian* of the offender or victim around to put a stop to things, I will step in.

I have asked other people’s children to pick up the trash they just littered.

I have told random kids to stop throwing rocks at a building.

I’ve walked an unknown crying child back over to a group who had been picking on him and mediated an apology.

Once I even called the police while I watched a group of teenagers defacing playground equipment. (I wasn’t prepared to tackle that one on my own with my young children in tow.)

I do these things for the same reason I go to a child who looks like they are seriously hurt or are in distress. I am an adult member of our community and I believe I have a measure of responsibility for everyone’s children, not just my own.

I feel justified in these actions because I want the same conditions to apply to my own children. If you see my kid acting or being treated badly and I’m not there, I want you to speak-up. It’s important for our children to understand that the rules apply all the time, even when their guardians aren’t around.

*Note: Circumstances are obviously different if the child’s guardian is around. Hopefully, in such a case, they would be quick to correct their own child’s behavior. If they don’t see the offense, or just seem to be apathetic to the situation, I would kindly make a suggestion to them such as, “I’m worried little Johnny might hurt himself if he continues to climb that high voltage tower,” or whatever is appropriate.

I know not everyone agrees with me on this one, so I’d love to hear your opinion…