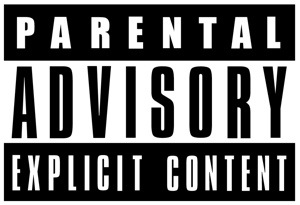 Warning – I’ve quoted some stuff that is pretty offensive. I’ve chosen not to censor the language.

Earlier this week, my friend Heather sent me this article by Andrea Warner. It was posted on the CBC Music blog.

Before reading this article, I had never heard the three songs that Ms. Warner specifically discusses; Rocko’s “U.O.E.N.O”, Kanye West’s “On Sight” and Robin Thicke’s “Blurred Lines”. I have since listened to them all and have purposely not provided links.

In “U.O.E.N.O” (meant to sound like “You don’t even know”) Rick Ross sings about drugging a woman’s drink with powdered Ecstasy (Molly) and then raping her:

Ross issued an official apology which stated “It was misunderstanding with a lyric… I would never use the term ‘rape’ in my records.”

Ahhhh, that clears everything up doesn’t it? It is all just a misunderstanding. If you don’t actually use the word rape, you aren’t talking about rape. So, I guess you can incapacitate someone and have sex with them without consent – just don’t call it rape and you’re good.

Kanye West is no stranger to accusations of misogyny but his latest album Yeesus is like a violent vent. The track “On Sight” has been singled out because most people agree he wrote it about the mother of his new baby:

Black Timbs all on your couch again
Black dick all in your spouse again
And I know she like chocolate men
She got more niggas off than Cochran, huh?

I wonder if his new daughter will have any effect on his opinion of women?

In Robin Thicke’s “Blurred Lines” the title alone sets the No Means No campaign back 20 years. There are some pretty nasty lyrics, “I’ll give you something big enough to tear your ass in two” but the thing that’s most disturbing is Thicke repeatedly whispering these lines into the ear of a naked woman in the video.

Actually Robin… the lines are pretty sharp. Sure, you can make things fuzzy if you squint your eyes at just the right angle, but you calling them blurred doesn’t make them blurred. I’m sorry that you hate them.

People say, ‘Hey, do you think this is degrading to women?’ I’m like, ‘Of course it is. What a pleasure it is to degrade a woman. I’ve never gotten to do that before. I’ve always respected women.’

What? Because you haven’t done something before, it’s okay to do it now? “Oh no, it’s okay officer… you can check. I’ve never robbed a bank before, but what a pleasure it is to do it now!” Excuse me while I find my ski mask.

Thicke’s inclusion in this group shows that misogyny is not limited to rap, as is commonly believed (he is mainly R&B/pop). Degrading messages are common in all genres of music – except maybe the female indie folk scene.

I recently read this statement:

“In America, a woman is raped once every six minutes… No one is saying this happens solely because of rap or rock music, but certainly kids are influenced by the glorification of violence.”

So, what was going on in music back then that Mrs. Gore and our parents were up in arms about? You’ll see it wasn’t just rap.

Punch the bitch in the eye then the ho will fall to the ground
Then you open up her mouth put your dick, move the shit around.
– N.W.A, “She Swallowed It” (1991)

Bitches ain’t shit but hoes and tricks
Lick on these nuts and suck the dick
– Dr. Dre, “Bitches Ain’t Shit” (1992)

In her article, Warner concedes that misogyny in music is not a new issue but she contends that the intent has changed.

2013 has introduced a new kind of misogyny, a deliberate and task-oriented degradation and objectification of women that’s far more disturbing than the casual, inherent misogyny of generations past.

I honestly don’t know if that is true. What is obvious to me, however, is that sex sells, and unfortunately, misogyny sells even better. Yeesus has received rave reviews calling it “brilliant” and “exciting” (from a female reviewer) and “Blurred Lines” and “U.O.E.N.O” have been at the top of the charts for weeks.

Manufacturers and distributors issue statements that they do not “condone or endorse” the content which they find “violent, sexist, racist and indecent”, yet they continue to release them. In 1990, Cliff Blodget, a partner at Rap-a-Lot, admitted that his research had shown demand for harsher lyrics, and that he urged bands to write them. I doubt this attitude has changed, unless it is for the worse.

Not all kids listen to this music (I didn’t) and not all kids who do will buy into the culture. But when these songs are continually produced and become popular and increasingly mainstream, it sends a message that it’s okay to disrespect women.

Disclaimer– Never have I been, nor will be, described as; all that and a bag of Fritos, off the heezy fo’ sheezy, redonkulus, or poppin’ fresh. I am not down with the kids.