When a heart stops beating

A friend of a friend received a new heart yesterday. Let’s call him Paul. 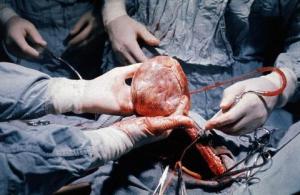 Paul has a young family and is a fit and healthy guy. A few months ago, he started to feel sick and began having some trouble breathing. A virus was attacking his heart causing myocarditis, damage and swelling of heart tissue. He was in heart failure.

Paul fought off the virus but there was just too much permanent damage to his heart. He could regulate things with drugs for a while but he needed a heart transplant. They got the call Thursday night.

My friend spent yesterday sitting in the waiting room with Paul’s wife. Both families were planning to vacation together this week, both vacations have now been cancelled.

Early in the afternoon my friend took a break and came to my office. “They’re stitching in the new heart.” We both looked at each other for a moment as those words sunk in.

Paul’s heart was gone. It had been removed from his body and he was being kept alive on a bypass machine while another heart was sewn in to take its place.

This was a young and healthy heart, but it was not a new heart. To use car salesman lingo, this was a previously enjoyed heart.

July was a deadly month on Nova Scotia highways. Just last week there was a single vehicle crash that involved seven people. Three young men (17, 19, and 20) died. Two more young men (18 and 19) are still in hospital with serious injuries, one is paralyzed. For those of you who are local, you know the rest of the sad details.

I spent a lot of time last night thinking about the young and healthy heart that Paul received. We don’t know the story behind it, but Paul’s fortune was born of another family’s tragedy. I hope a lot of people benefited; heart, lungs, kidneys, pancreas, liver, intestines, bones, ligaments, corneas…

It sounds trite, but please always wear your seatbelt.

If you don’t, at least make sure you’ve signed your organ donor card.

5 responses to “When a heart stops beating”